A guide on buying Scorps for anyone new to Radix NFTs

Let’s begin with why buy a scorp?
In short, it’s by far the most popular NFT project on Radix right now. It was the first NFT on Radix with all its art released and that people could put as their pfp.

The most popular and richest people in Radix all have a scorp, and it has become more of a status symbol to hold one (which is what usually makes an NFT a blue-chip).

Its creator @korone_stan is now a respectable member of the Radix community and genuinely cares about Radix and also has other projects lined up, so we can predict that his new projects will be successful and that a scorp holder may get some benefit in his future projects.

Even if that does not happen, some philanthropists and Radix biggies like @Bobbysizemover have already started airdropping some tokens/NFTs to scorp holders.

I think it’s kind of well established in Radix circles now that if you want to play in the big leagues some time down the line, you must be involved with an OG Radix project like Scorps.

Now what are all these different scorps?
There are several traits that distinguish the scorps and you can see details on radstrike.com/scorpions/ You can also see all scorps on the website with all their traits. You can filter by traits, scorp number or wallet address.

I would say there are 5 categories of demands for scorps:

Let’s break these down: 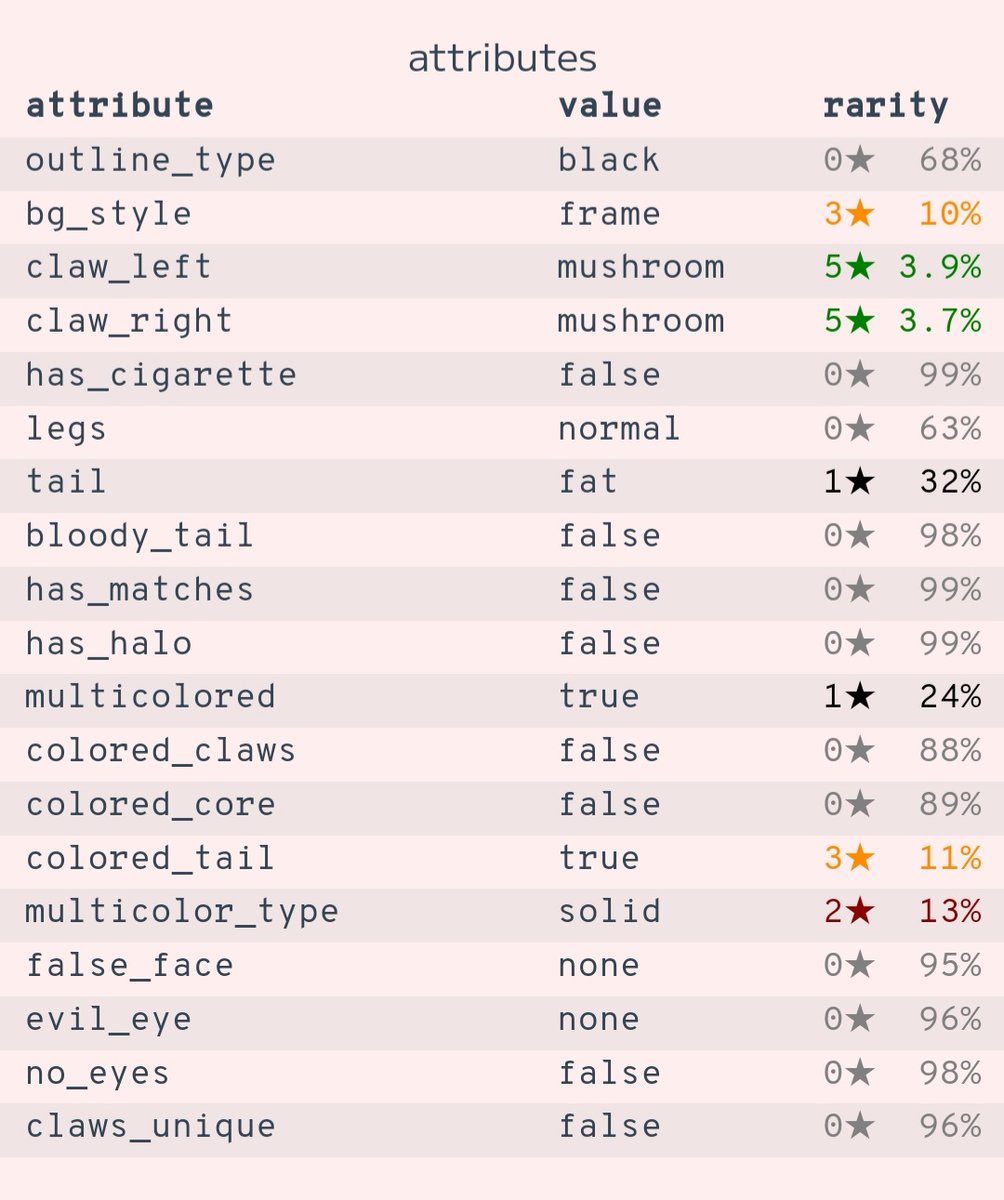 You can check the overall ranking of scorps according to rarity in the following sheet:

I think it’s safe to put any scorp in the top 1000 rank in this category. 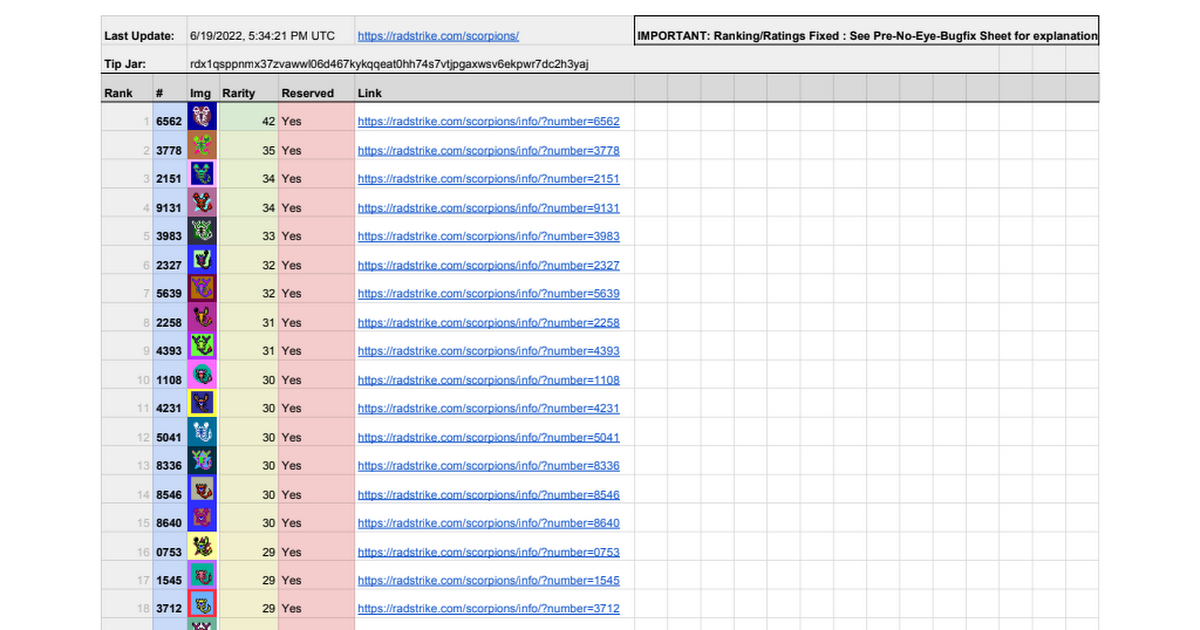 You get to be a part of the Scorp community or as we say “Live the scroplife” (scrop, instead of scorp is intentionally said, it’s not a typo). Having at least one scorp can be a status symbol for sure. Floor scorps will be profitable to have, if the floor prices rises.

And the market prices that accordingly. The ATHs of price are usually being made by this category. Here’s a snapshot of the traits of a casper (white outline): 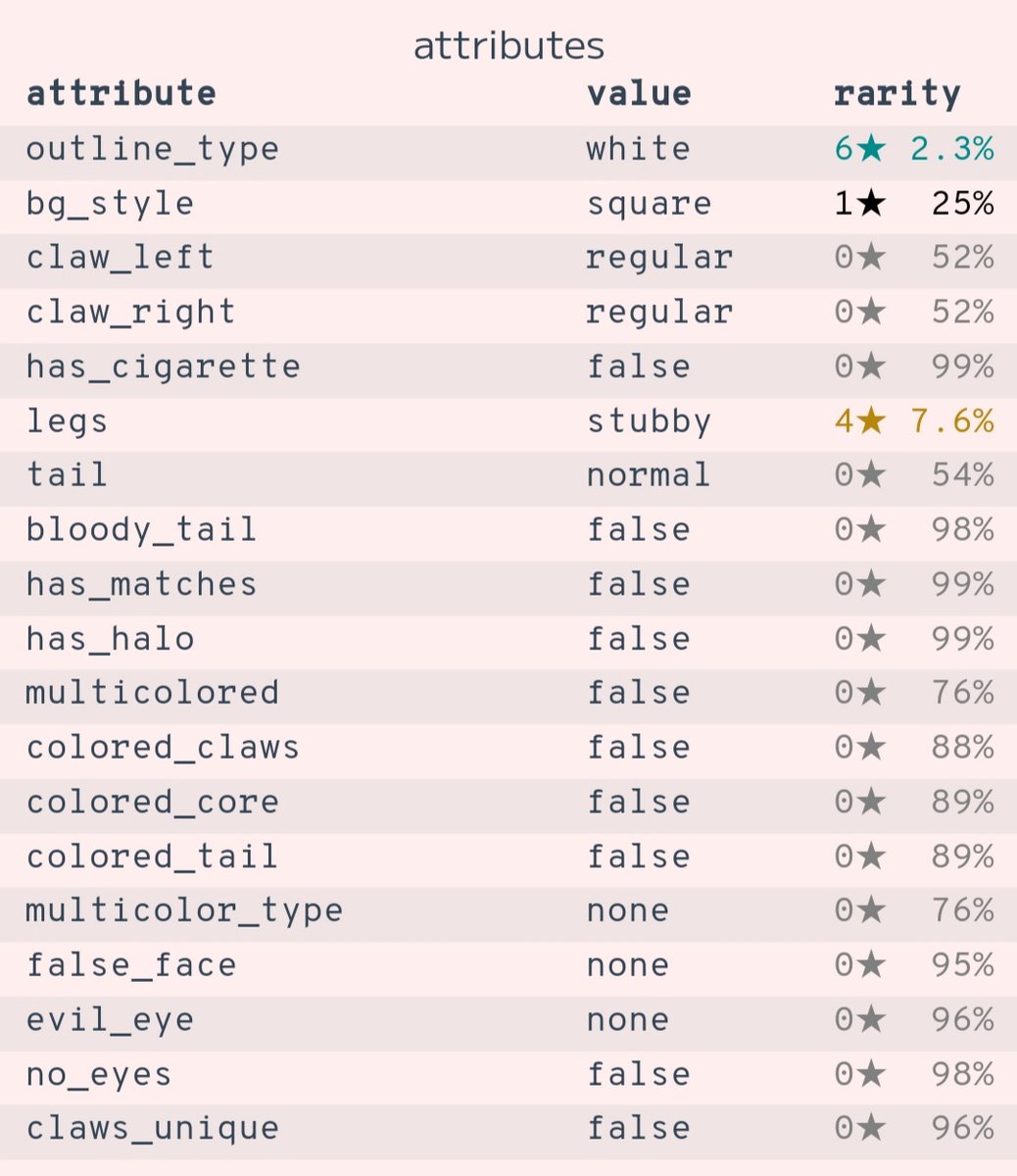 As you can see, its total rarity is 11 star only, but I wouldn’t be surprised if the current market gives a better price for it than the 20 star I shared earlier.

The best example of this is a natty. A natty is a scorp which has 0 star ratings for all traits. So in one way, it’s not rare at all if you look at individual traits, but because it has the combination of each and every trait as 0 stars, it has become desirable.

This also includes a mono (where the scorp colour and background colour matches). It’s an unintended combo, but it has become highly desirable,valuable and expensive.

In fact price can be much higher for some, if a buyer just wants a “clean background” or whatever random other trait. This category largely does not have anything to do with rarity at all.

So how do I buy one?
You can meet scorp sellers at Abandoned Trading Group
t.me/Abandoned_trad… for now. And in the coming months, we can expect scorps to be listed in some marketplace hopefully.

Once you and another individual make a deal, you need to route it through the Scorp wallet which acts as an escrow. The details are listed in radstrike.com/scorpions/abou… .

Okay, but which category should I buy in?
This is NFA, but in short from an investment perspective, I would say probably category 1 and 2. Partially because most people wouldn’t be able to afford to buy in categories 3 and 4, and category5 is subjective. But other reasons too.

Category 2 obviously if you can’t afford anything else. Having at least one scorp is significantly better than having none, and is a big flex.

But also, if you believe in quantity over quality. Floor price can be a good investment for sure. Smaller amounts from several sales can be more profitable than big amount from one sale, if the quantity is big enough.

Category 1 because I believe it is severely underpriced in the current market. Scorps from Category 3 and 4 are valued waaay higher than this category. Of course, you end up valuing what the market values but sometimes, contrarian views can be a good investment.

So if you can afford it, you can get the high rarity scorp cheap now and maybe once a marketplace listing is there few months down the line, it starts gaining in value.

This would need for the market priority to slightly change (and please note that it hasn’t, till now) but I personally feel that it will and the rarity rankings would start mattering much more than they are now.

This is not to say that Categories 3 and 4 will necessarily lose value, but that Category 1 will catch up.

Of course this is only from an investment perspective, but if your purpose of buying is a status symbol and you can afford it, you should buy from Categories 3, 4 and 5 for now!

I love this, introducing and providing a step-by-step tutorial the most populat NFT project is an awesome idea!

Just an idea: try to use some extra formation to better distinguish the different part of the nexts. (lists, more bold text, underlines can work very wel)

I would also include the initial price of the scrops, to let everyone see how much we have exactly grown over time.

Here is actually a great video on scorps by rad news , please do support. How many do you own ?

It explains why they are so awesome and also the different traits. Thanks for all the info and I agree the community has decided right, I am actually working on a scoprs rap song lol, will share soon.

Yeah, was my first time writing such a long post here. You’re right. Should ideally have clear demarcations. Bold topics etc. I’ll see if I can edit/modify the post.