Who are the top competitors of Radix?

Right now, the only example that comes to my mind is Hedera. However, the Radix team with this article already explained why DAGs (like Hedera) don’t scale well, and how Radix solves it.

Do you have any other example of competitors comparable to Radix?

For me the hardest competitor remains Ethereum. Not because of its technical things but because it already received more adoption than anything else.
As long as people are trying everything to keep this Ethereum dream alive it will be alive and will be growing in my opinion.

Crypto is not yet at the point where you win purely with superior technology. You win with decent to good tech and a whole lot of selling a dream and an idea.

Once the adoption comes from the mainstream this will shift quickly! But since this could still take years I think Ethereum is the hardest competitor.

I believe that from the tech perspective we have no competition (yet). However, there are the hype factor which could make them a competitor for us. Like Aleph Zero, they have a great technical background, but still no Radix level and they have a much higher hype than us.

So I believe that in the short term Ethereum, and some hyped up L1s can be a competitor for us.

Do you have any other example of competitors comparable to Radix?

Maybe I think KDA is one of the best competitors for radix, I mean with lower market cap, and much less supply than radix. Maybe it has higher potential.
Maybe below is a comparison between Radix and Kadena. 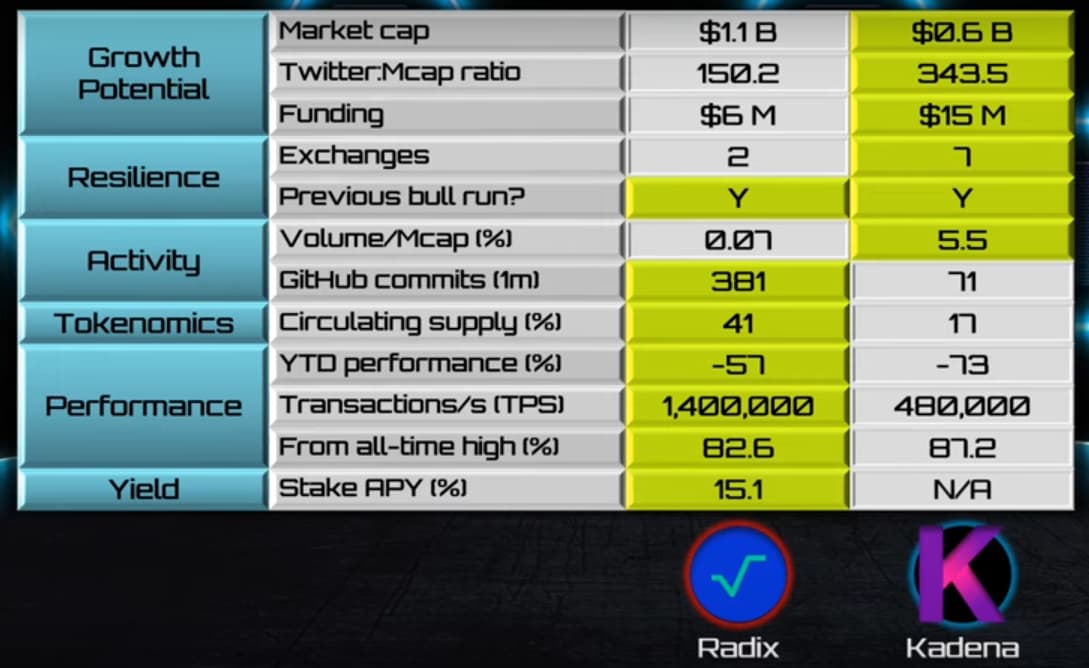 Anyway I’m more holding radix, by looking at this comparison. But KDA will be one of the toughest rivals in the future.

Anyway I’m more holding radix, by looking at this comparison. But KDA will be one of the toughest rivals in the future.

IMO only the “GitHub commits/month” show the true value of a project, “since that’s prove how much the project is developed/month”, all other number show basically economics figures that’s not related to the project’s true value.

So I believe that in the short term Ethereum, and some hyped up L1s can be a competitor for us.

Hype > “what fast come, fast gone” (a philosophy in China). Basically if people come into a project by a “hype” but not “value”, they will also gone like “hype” when their “trust” haven’t built but already changed into “distrust” (Cardano, Luna,…). Agree that we need some “hype” for more attention, but the most successful project would be the project that build mostly by “value”, not by “hype”

I think Ethereum is the hardest competitor.

Agree, as my point above, I also seen that ETH got the most development “value” on it’s ecosystem and already gained “vast amount of trust”. If we cannot win devs over ETH by our “atomic composability”, it would be the end.

@unghuuduc @Wagtail I fully agree with both of you. As we know, ETH was the first mover in the smart contract platform market and this means having advantages and disadvantages.

However, Eth currently has a lot of applications running on it, and Radix is yet too small. Just think at AAVE, Chainlink, Compound, Shiba Inu and Axie Infinity. At the moment, each of these coins running on Ethereum are individually bigger than Radix. What if ETH decides to buy Radix and incorporate it in its ecosystem?

For this reason, I think that shortly before the release of Xi,an xrd needs to focus on how to build a brand (and a good communication strategy) so as to attract more and more devs.

For this reason, I think that shortly before the release of Xi,an xrd needs to focus on how to build a brand (and a good communication strategy) so as to attract more and more devs.

What if ETH decides to buy Radix and incorporate it in its ecosystem?

I don’t think they can buy us? Dan already proved that Cerberus Consensus is superior in tech. Maybe they can support us (financial and influencial) in exchange we provide scalability and atomic composability solution for them? Maybe they ask us to build a L2 Cerberus project on Eth? Maybe they ask us to list their ETH token and move the whole Ethereum ecosystem into Radix?

Yeah, I also don’t see a realistic scenario for ETH buying Radix. There might be a legal way to do that, but never would I think that the leadership of Radix agrees to this. They also have many lawyers, and afaik there are strict rules in the signed documents what each and every member of the company can and can’t do.

The last scenario you wrote is actually the most realistic one in a 10-year scale.

show the true value of a project

Yes that’s right the main thing that matters is the development/month data. Show seriousness and activeness in development. and both Projects are also equally growing but currently radix has a larger number.

What if ETH decides to buy Radix and incorporate it in its ecosystem?

I think it’s not impossible to include radix in the ecosystem, custom settings on smart contracts or like existing bridges in general. but things are different maybe because radix is basically on L1, and the ethereum ecosystem moves on L2. But if that happens it will make radix get more attention and develop quite rapidly.

I agree. Ethereum is the biggest competitor.
It isn’t the most performing and reliable Blockchain out there, but it’s definitely the most popular. Lots of well known projects use ETH. People who don’t even interact with the crypto space know what a Bored Ape is.

You can’t compete with Radix speaking of performance, but you can of marketing. Even though Ethereum has ridiculous gas fees, it’s still popular. How so?

Radix isn’t trying to kill any chains. His mission doesn’t include “cryptocide”.
Every time a project take big swings at growing, it’s seen as taking swings against others.

We should just focus on making the cryptosphere, the defi, to grow.

Radix isn’t trying to kill any chains. His mission doesn’t include “cryptocide”.
Every time a project take big swings at growing, it’s seen as taking swings against others.

But still, there are one and only Internet on Web 1.0.

Idk if there will be one or more chain on Web 3.0. However, I do know that people prefer “simplicity” and we will still come into “chain centralization” (everything come into only one most powerful chain) soon.

The more efficient that chain become, even in bridging other chain to create more “connection” and thus “friction”, the faster the “natural elimination” process.

So you believe over the longterm there is only gonna be one dominant chain?

I do know that people prefer “simplicity”

Even though I could very much also see that it becomes more an internet of blockchains each chain having their specific purpose some maybe super decentralized cause its cause needs that attribute other only made to be fast, or only focused on privacy

What are your thoughts on that possibility?

that attribute other only made to be fast, or only focused on privacy

So you mean possibility of multichain future where there would be chains that focus on their characteristic?
But can’t you see Cerberus already solved all the trillemma and also the “atomic composability”?

For what I know, if we ever has the “internet of chains”, the data, information sharing between chains would be a vulnerable point for attacking (see Ronin hack)

And even if they “do” secure the cross-chain transaction, how would they do with “atomic composability” when they’re “async”?

If you have ever study about computer science (although I’m an bachelor in economic), you would have the same conclusion as mine: there are one and only Internet, so in Web 3 there will also one and only “Internet Chain”.

Still, there would be private network here and there for the organizations, institutes who need privacy (like on current Web 2), but public? One and only.

Thats some good points.
But the bridge problem might be solved with networks like Dot or Atom where you don’t need a bridge to operate in their internet of chains

And even if they “do” secure the cross-chain transaction, how would they do with “atomic composability” when they’re “async”?

Thats a good point, makes me lean more into the direction of there only will be one chain also the exemple of the internet that there is only one internet and not 10 makes me rethink

Ah alright so it doesn’t fix that problem

What are your thoughts on that possibility?

I don’t know, this is a really good question. In this particular moment, I’m afraid that multichains would brings a lot of vulnerabilities and slowdowns. Radix needs stability, adoption and user-friendliness: I would then opt for what @unghuuduc called “simplicity”. In this moment, having bridges is good. Maybe in the future we can start thinking about allowing easier movement between networks (I am thinking about something cool like what AnySwap / MultiChain is doing connecting to a large number of networks). Right now, Radix only has XRD on ETH, but as more cross-chain assets come to the mainnet.