How long do you think this bear market will last compared to former markets?

Here are my thoughts, this bear market will last shorter than compared to last, here is why.

So many projects much more developed with products that work
Intuition are involved and acclamation - Grey scale ect aint going away.
Crypto is so much for know in publics now
A lot of investors are much more wiser and know that this is a great time to buy.

I agree to those factors yet at the same time the global economy is in a recession and the ukrain war isn’t helping this at all potentially even worsen it by food shortage since farmers might not be able to plant for next season.
Also I think the luna crash destroyed a lot of trust in the people which now has to be brought back.

Since we are in a recession less people or institutions have money “left over” to invest in highly risky internet money.

I think one big positive point is that it is not only ideas but working protocols and companies. A lot of stuff is already there unlike it was 2017

I think nowadays the use of crypto is quite mature and some countries have implemented taxes and regulations that strengthen the position of crypto in society. In general, crypto has started to be trusted by the public And have a stronger market. I remember there used to be a lot of issues and fud created by several countries and finally they all disappeared and were quickly resolved, Making the crypto industry more mature, and now that much education about Cryptocurrencies is easy to get, reduces the risk of fraud quite a lot.

I hope the next stop is $100k and all the long wait will end pretty well. The Bitcoin community is so big and strong, I don’t think it won’t be shaking for long.

i think we will have a very long bear market (until 2023). thats the reason why:

i hope i will be wrong but thats a possible scenario.

That is not a very long bear market, the halving is coming in 2024 so we should expect a bear market until at least then.

So a short bearmarket for you would be if it last until the halving in 2024?

What would a long one look like for you?

Earlier or later the 100k are gonna get cracked but it seems right now that it is still a long road till there
Do you think that if we break the old ATH of 61K we go rather straight to 100K?

in average a bearmarket is about 6 months long and a bullmarket about 22 months.
so, 2023 (could also be december) is very long for me.

So you would say beginning of 2023 the bullmarket will start again?

These average bearmarket data is representative for bearmarkets in crypto only or?
Cause I really think the current econmic recession could extend the crypto winter

Also I found this data on duration of recession: the average length of a recession varies in a narrow range between 12 and 26 months

Assuming the recession has a negative impact on the crypto winter it might extend it to a year?!

Curious to find out about

No thats the normal cycle look at the charts and halving’s, I am pretty sure we will be bear until next halving. @ZitaDonDon , thats not long mate and anways the longer the better, best time to accumulate. @Shrimp the ATH, was 69k I think but no way we go to 100k straight away, just remember each cycle is less sever that last, this means less chance to make money as the market levels out, but who knows this is crypto hey

well, maybe we have to think in a new way. what if it will never be the same again? what if we’ll never see these ath again?

No of course we will see the ATH again, BTC will probably got to 500k but what I am saying is the amount of money we can make between bear markets and bull markets are getting less and less looking at the charts of each halving, if that makes sense

500K is absolute bullshit in my oppinion. we never touched 100K. regardless of whether halving should play a role or not

I also think we might need to wait until the next halving. In this market situation, there is no sign of the stopping of the free falling. And we shouldn’t forget when we compare these cycles that regulations will most likely to come up for the time, which can change our prediction drastically in both ways.

We don’t have to forget the historical period we are living in: a pandemic, a potential “third world war”, economic recession, political instability. From my understanding, the war in Ukraine has generated quite a bit of discussion about the crypto industry. It is not a case that the bullish market ended around November/December of last year. Apart from all the hoaxes that run on the internet, it is not wrong to consider the fact that BTC donations are actually being used to bring about humanitarian aid for Ukrainian residents. For me, the war has made one thing at least clear: btc seems to have intrinsic value.

For me, the war has made one thing at least clear: btc seems to have intrinsic value.

Maybe previously crypto which was just a meme like Shiba Inu had also been donated in large amounts to India for humanitarian assistance. But quite a big problem occurred, such as kusilatang in cashing the shiba inu as real money. tax policies that curb transactions.
In some ways kropto is enough to have real value and movement but institutions and banks are still making it difficult, but with the resilience of the community so far quite solid I think, just comparing memes of coins that I think have no value can be quite valuable. I think we will see the public view of crypto and bitcoin will be quite large.
I just want them to quickly resolve the war problem which only worsens the situation and restores the economy. they may think war is a source of gold, But the humanity at stake in that danger must end.
And I think will have to wait for the G20 movement to see if we are going to be bullish in the near term or not.

The current decline has not yet reached its lowest point, usually if it is technical, the recovery will occur after a correction is high enough, and is initiated by a sideway, predicting the recovery process will occur between six months to one year.
We’ll see this during winter like this, if you buy bitcoin, it will accumulate in the medium or long term. Meanwhile, in the short term, it will not rise to its highest point. Therefore, short-term traders can choose token heads or bears that move against the price of bitcoin derivatives, the algorithm against.

In my opinion, we will need to wait more than 6 months, I think something between 1/2 years. This bear market is different from the previous ones: crypto is more correlated with other assets these days than it was during previous bear markets. And don’t forget about the influence of media narrative. So it stands to reason that this time will last only as long as the wider economic/political issues do.

I agree with you here!
This one might last long and will dry out a lot of projects
The economic situation and the the ukrain war is just stuff which might not go away so soon and potentially even worsen
I can see that this last till the next halving

Oh this will absolutely last to the halving no doubt it in my mind and I happy with that more time to buy, but two things to remember the worse inflation gets the more btc becomes a safe haven, so if the buying power falls alot, at btc as at the bottom then your best bet is to put it all in btc right, look at the graph its been going up since we took money of the gold standard 1970.

Second think is the war could change for good at any moment, look at covid, gone in months, but Like i said I am happy to buy for 2 years indeed, I HOPE it lasts to 2024. 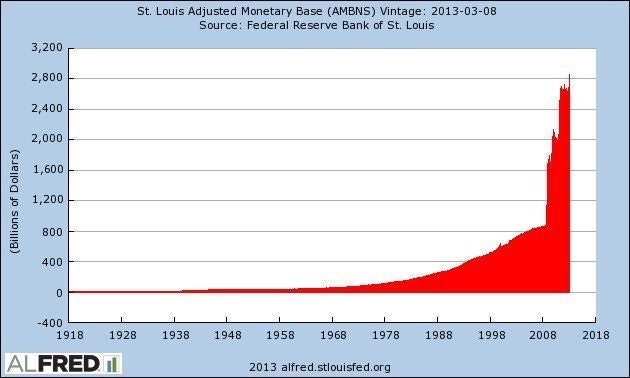