What have you learnt from Cerby rug?

I was shocked to see cerby rug, really I had high hopes as one of the best projects on radix, sadly it is now dead, I have learnt to not invest too much into one project no matter what and not to trust everyone that says something is good, DYOR

for me the important thing is knowing the team. And actually making sure there is a team and not just a single person with too much control over a project. The second point might be hard sometimes since right now the projects might start by a solo dev but ideally speaking there are more and well known in the Radix/crypto community.

DYOR is a tough call. Because its hard to analyse the technical side of things sometimes when not beeing an experienced dev as well.

Well yes but the lead guy was trusted by the community , its very sad what he did, I am not sure why he did it that way, I should have staked for only a short time and then took out staking profits as I had 10 million tokens, but I can assure that oci will not go the same way as Florien to well known by radix team and they support him , always take out the money you put in

Well even OCI is as far as I know build around Florian from the technically side of things.
Nothing comes without risks. But I do agree, I am not really fearing a rug there!

Well, I didn’t invest because the project didn’t look very good to me. So I learned that my gut was right on that one at least!

@wagtail Radix fully supports Florian, there was a team behind cerby, i dont think anyone saw it coming , also not much of a team behind oci but radix support them so i am happy to invest big
@kevinforrestconnors Good move mate, i though it looked great
@ZitaDonDon We dont know if he did this before there is no evidence, all projects on radix are centralist now , they did a lot of work he released the code, ociswap code is not open source

We dont know if he did this before

he did. many people knew him from old projects and he did the same. i was warned about an investment but i was confident.

I have learned to invest 100% in Radix

My biggest takeaway from it, was that even the most trustworthy looking guy can do a rugpull, if he has the ability to do so.

I wasn’t invested in Cerby, but followed along, and seeing M. doing a rugpull, after so many great development, and help to others was pretty shocking too me.

Lesson learnt: never trust a project, where a man with no public information about him can do a rug pull anytime.

Does anyone remember their roadmap

?
I didn’t expect rug from that roadmap, but I didn’t take the team seriously from it.

Cerby Finance is a new Cross-Chain Token Standard allowing you to easily bridge between blockchains and DLT networks. 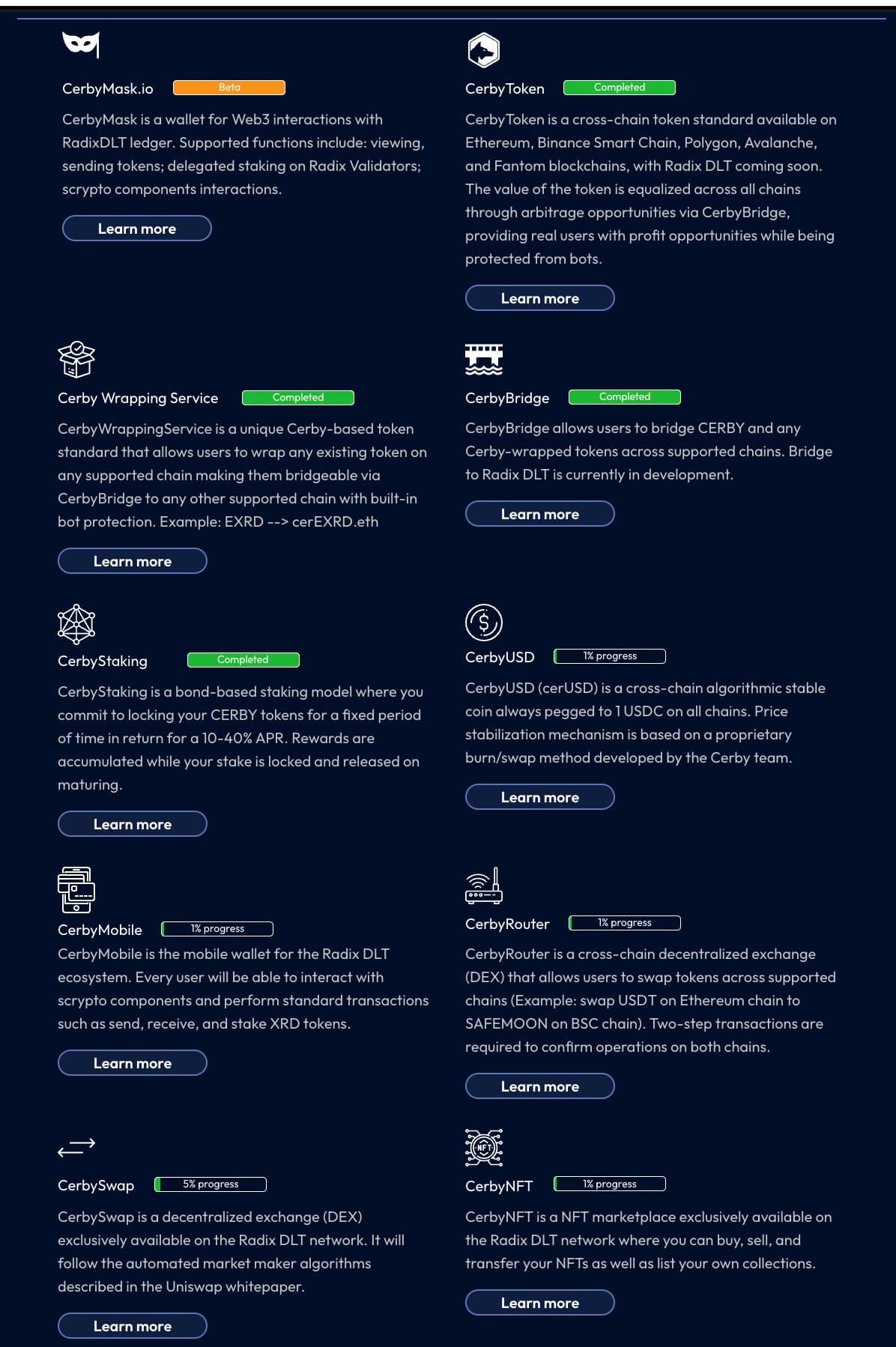 I learnt the importance of a good KYC. To trust a project, no matter wheter it is on radix or outside radix, KYC is vital: the man behind Cerbymask definitely tried to rug pull. Luckily, people have pictures of him, along with his address and more…. I think people have been threatening him and he - afraid of the legal consequences he may face - will finally going to give the money back.

Still no KYC on Satoshi tho

But, totally understand this context was very different.

For myself I’ve been convinced to do maximum DYOR for the Cerby project at first and have had several on other network bridges. But indeed I think I have to deepen DYor so as not to meet a project like this again. And I mean it’s a big and smart project, it started but turned into a disaster :))
KYC ,maybe not a solution either because some anonymous projects are successful and even run well.

it’s easy to create such a roadmap. i can do this easily too but i have 0 knowledge in this. the problem for me was that he or the team was way behind the roadmap and there was no update. i think an update was published 4 weeks ago but that was some bullshit with almoste 0 progress.

They did make ALOT of progress, they released all the code as open source, the problem was the project was to ambitious, the other issue was he did not have support from the radix team, like oci does.

they released all the code as open source

But this was after “the Rugpull” or am i wrong? Before nothing was open source.

Yes after as a way to say sorry for trying to leave with all our money and as a way to stop people from trying to hunt him down and get revenge , at first he said the code with stay closed then those trying to resolve the matter must have asked him to do this.